MRKT Condos is a new luxurious condominium project located at Spadina Avenue and Dundas St West in Toronto. This project, which is now in pre-construction phase, is by Tridel. 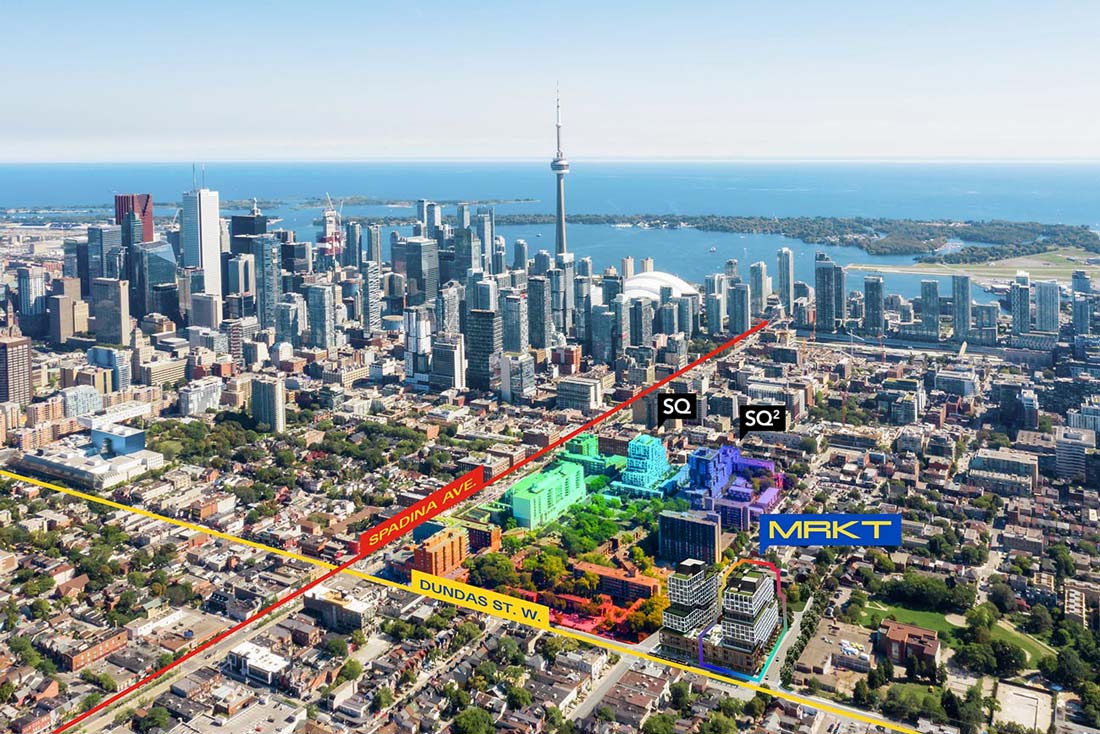 MRKT Condos is the third phase of Alexandra Park’s master-planned community, an ambitious redevelopment project by Tridel. It comes hot on the heels of SQ Spadina Queen which is already completed, and SQ2 Spadina Queen, still under construction.

It will rise to 14 storeys and house 172 units. VIP Launch is scheduled for September, 2020. Additional details including the layouts, unit sizes, occupancy date and more are still unknown.

MRKT Condos will feature great amenities that will include a packed party room with a bar plus catering kitchen, theatre room complete with a large screen TV, a fitness facility, fully-equipped weight room plus cardio centre, yoga and pilates studio and a whirlpool & steam room.

Outdoor amenities will include a rooftop terrace with plenty of foliage and a stunning view of the skyline, designated barbeque areas as well a sundeck that will allow residents to enjoy the summer season.

MRKT Condos is centrally located close to transit. The area is serviced by regional bus services and streetcars connecting riders to the Yonge-University subway line, heading south towards Union Station or north towards Vaughan. Commuters can get into the downtown centre in less than 15 minutes.

It is adjacent to the city’s central transit and has been ranked by Vogue Magazine as the second coolest place on earth. This is a fantastic location that is not only makes an ideal home but also a smart investment.

The world-famous Queen Street West which lies right on the doorsteps of this condo is lined with thousands of businesses including bars and lounges, antique shops, and art galleries.

The area has numerous grocery stores, bars, eateries, entertainment as well as shopping options within walking distance of the project site.

Future MRKT Condos residents will have unparalleled access to all the best downtown Toronto’s destinations that surround the project site including Chinatown, Kensington market – a heterogeneous neighbourhood, and the Fashion District.

The City Hall and CF Toronto Eaton Centre are both just minutes away. With supermarkets, pharmacies and post offices easily accessible, residents will be able to do their daily errands without the need of a car.

The project site is also close to great schools, OCAD, University of Toronto, and Ryerson University, the major employment centres, and hospitals.

If you are looking for a luxury residence or a lucrative place to invest in, this fantastic condo in the hottest location in Downtown Toronto provides a rare opportunity that you should not miss.

Based in Toronto, Tridel is an acclaimed, award-winning home builder that has been in business for more than 80 years, constructing houses and condominiums with over 85,000 homes under the belt.

The developer has an impressive portfolio that includes lavish condos such as the 26-storey Bellair located in Yorkville, as well as the Accolade, a 23-storey high rise boasting hotel-inspired amenities like room service, house cleaning, and an aquatic waterpark.